Lemontree is a game for the Library at the University of Huddersfield in the UK.

In the words of the game’s creators:

It allows a more social view of the library, assists knowledge filtering, discovery and creating well crafted user journeys for learning and pleasure.

As well as receiving points for certain actions (checking into the library, returning books, recommending things) achievements are granted to active users for completing certain combinations of actions such as coming to the library at the weekends five times, or borrowing widely from every subject area to completing all the works by one author! 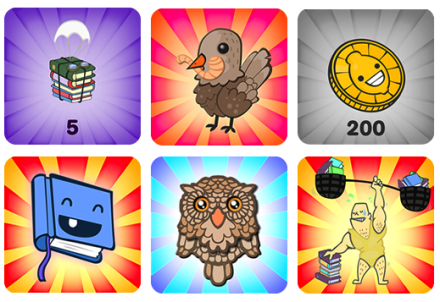 One of the many things I like about Lemontree is that, aside from signing up, playing the game doesn’t require an exorbitant amount of effort from students. Item use, library visits and other points earning activity is based on library account use and sent to the game through the ILS.

The downside to this automation is, perhaps, the need to insure that people are invested in the game. If it all just happens and players don’t have to actually perform they might not feel like there’s anything at stake. They’ve seemed to have found a balance. The game does reward people points when they tag items or make recommendations.

There’s a social aspect to the game too. Friending classmates and being able to see what resources they’re using could be really useful.

The visual design of the game is totally of the time and employs – by far – the best icons and general visual design I’ve seen on on a library related site. Most of it requires a library card to see but Iman Moradi, one of the folks at Running in the Halls – the game’s creator – was nice enough to send me some screenshots. 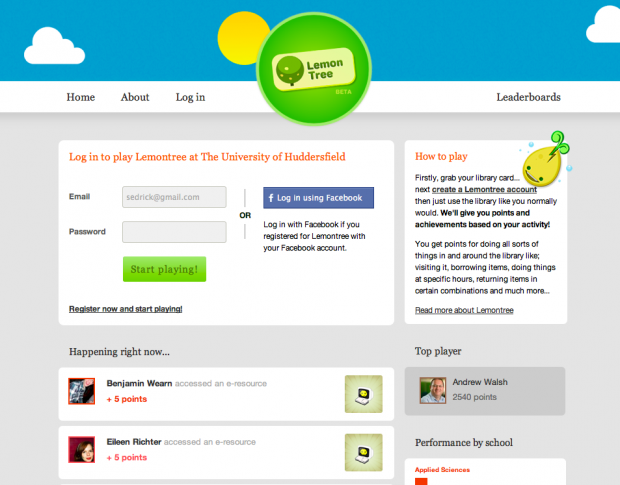 As usual, Brian Herzog nails it:

Instead of just using traffic cameras to catch people speeding, they’re using them to also catch people obeying the speed limit – and by following the law, those people earn a chance at winning a share of the revenue generated by speeding tickets. By offering a reward, the police are hoping to encourage more people to drive safely.

The theory, called gamification, is that people enjoy playing games because of the positive reinforcement from doing something well – thus turning something normally punitive, like a speeding fine, into a game of consequences: play badly and get punished, play well and get rewarded.

How awesome would it be to do this with library overdue fines?

It would be even better to arrange the game so that there’s no punishment involved. Only rewarding folks who bring items back in a timely manner.

Nicholas Schiller wrote a great response to Gorman’s quote in the recent LA Times article about the future of libraries. I particularly like the bit about how libraries can abstract the lessons we’re learning now and adapt the knowledge to solving other problems:

Yesterday I had the pleasure of presenting a preconference workshop at PLA with Eli Neiburger. Even better than listening to Eli talk was getting someone to play a video game for the first time. She liked it.

Here are some resources mentioned during the presentation:

I don’t speak or read Lithuanian and you probably don’t either. Good thing that nice design transcends language. Take a look at these beautiful sites.

The first image is the homepage of a big Lithuanian library wiki called Grazi tu Mano. 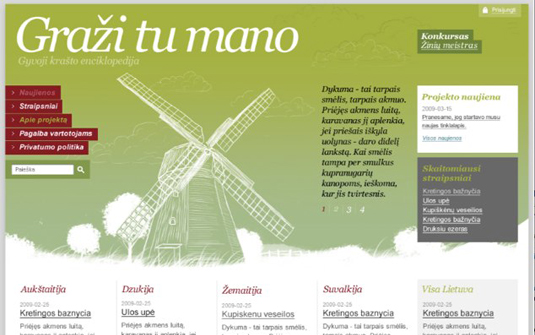 And *this!* This is the start page for a library run Alternate Reality Game called Paskutinis valdovas which makes me really wish I was able to read Lithuanian. The start of the game is a note left for the story’s main character by a girl in the library. 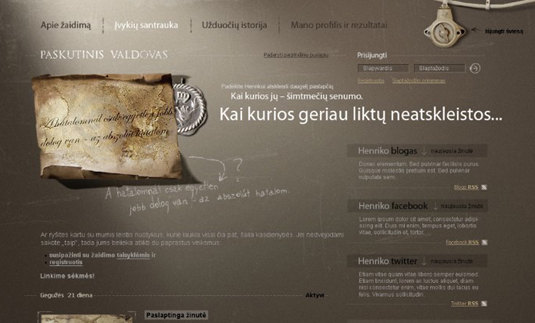 Genre-X is a library book group for 20 and 30somethings at the Oak Park Public Library. They don’t always meet in the library, however. They meet at local watering holes. This is great, but it isn’t the only thing they’re doing right. They recently had a hi-lo gaming event with a Nintendo Wii and board games, and DJs. 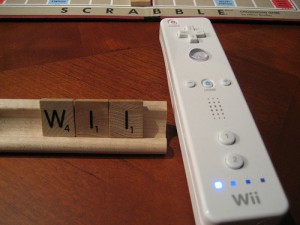 What’s more, they had a group member draw and hand screen posters for the event too. This seems like a small thing but it was quite a nice touch. It let a group member contribute to the project, emphasized something local and DIY, and provided added value that a lame 8.5×11 photocopy simply would not have added.

A follow up post states that event was a big success, attracting over 60 people to the library after hours.

Two bonuses. 1. The genre-x blog is particularly attractive. 2. When you visit the “about” page on the site, it doesn’t first go into details about the group or the library. It highlights the people behind the group.

Congrats to the folks at OPPL for connecting with a group that libraries have traditionally ignored. 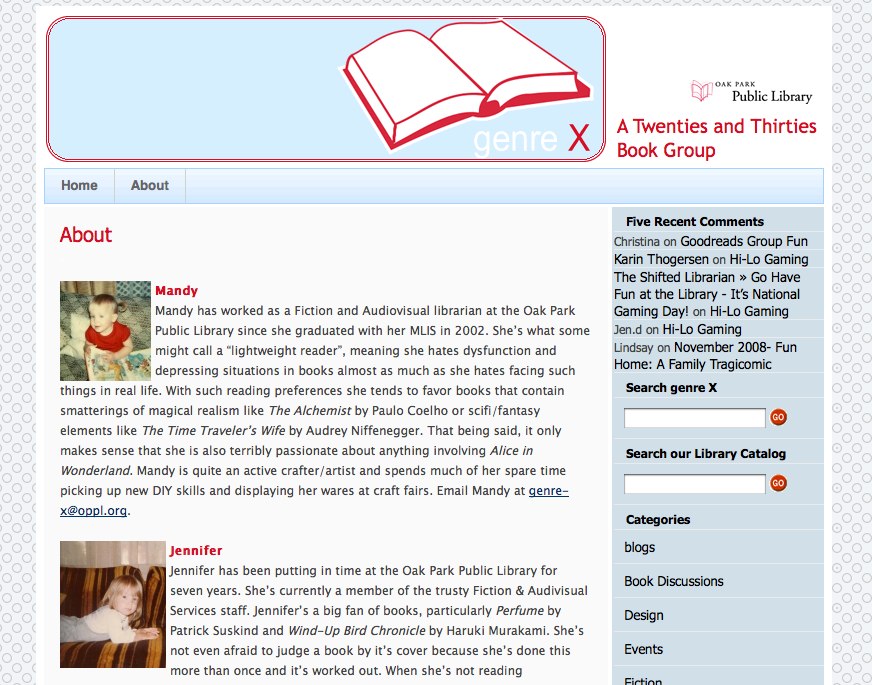 Jenny Levine and I have given a few gaming workshops at past Computers in Libraries and Internet Librarian conferences. After the sessions we’ve opened up the room to anyone interested in playing some games and/or learning about gaming. It’s proven to be a popular and really fun time, so this year Information Today has turned the post-workshop gameplay into a featured event. With refreshments even!

Since we’ll have three systems going at once, we’re opening up the option of an honest to goodness tournament with prizes. You probably want to know which game, huh? Well, it’s up to you. Sign up in the comments here or at a page we’ve created on the CIL08 wiki titled CIL08 Gaming Night to play Rock Band, Guitar Hero, or DDR. We’ll play whichever game gets the most signups!

In addition, Chris Harris is bringing some modern board games. Bring your own games, bring your latest shiny, new gadgets, and we’ll see you Sunday night!

Jenny Levine and I have given a few gaming workshops at past Computers in Libraries and Internet Librarian conferences. After the sessions we’ve opened up the room to anyone interested in playing some games and/or learning about gaming. It’s proven to be a popular and really fun time, so this year Information Today has turned the post-workshop gameplay into a featured event. With refreshments even!

Since we’ll have three systems going at once, we’re opening up the option of an honest to goodness tournament with prizes. You probably want to know which game, huh? Well, it’s up to you. Sign up in the comments here or at a page we’ve created on the CIL08 wiki titled CIL08 Gaming Night to play Rock Band, Guitar Hero, or DDR. We’ll play whichever game gets the most signups!

In addition, Chris Harris is bringing some modern board games. Bring your own games, bring your latest shiny, new gadgets, and we’ll see you Sunday night!

Our DVD player died after over six years of heavy use. The only logical replacement was a PS3 since it can play DVDs (and upscale them), Blu-ray discs and of course games. This will probably be the last physical media device we buy. Crazy!

The system came with a copy of “Spider-man 3” on Blu-ray that is hopefully going to find its way into the NPPL’s collection. Once we get this cataloged correctly I’ll likely buy a few more Blu-ray titles. Just enough so that we can advertise that we have a small collection. Not only will it serve as a good experiment to see if the discs are popular, it will also serve as good marketing for the NPPL. Even if swarms of people don’t have Blu-ray players (yet) it will showcase the library as a place with exciting new stuff that understands what’s happening in the larger information world. All that for $200? A bargain! It doesn’t always take much to try new things.

We’ll make our Blu-ray discs non-holdable for a month, just like our other new materials. Yes, this slightly diminishes the spirit of library sharing and maybe inconveniences some non-NPPL patrons. However, it drives some in house traffic to our relatively new beautiful library. While that sounds like a library-centered policy (bad!), it isn’t *fully* library-centered. The non-holdable period keeps new and popular titles around for people in North Plains to browse. This makes residents of North Plains happy and increases the library’s “placeness,” making it interesting and vital.

It is the middle of March which means that a bunch of library geeks will descend on Crystal City, Virgina next month for Computers in Libraries 2008. The conference is trying some new things this year and I’m excited to be a part of some of them.

Helene Blowers suggested that a Pecha Kucha presentation be held. Six of us will have 20 slides and 20 seconds each slide to make a point. I’m moderating the track that this is in which means I get to cut people off mid-sentence during this session. Fun! [Tuesday, Track C, 4pm]

Jenny Levine and I have been doing gaming workshops at the past couple IL and CIL conferences with some informal open gaming afterwards. It has morphed into a Sunday night event: the Gaming & Gadgets Petting Zoo. I need to start practicing being a Guitar Hero.

I’m facilitating a postconference workshop with some top notch library thinkers. Helene Blowers, John Blyberg, Sarah Houghton-Jan and David Lee King will be giving short presentations followed by conversation and brainstorming. It should result in some great potential projects!

Tuesday morning’s keynote will be given by Erik Boekesteijn and Jaap van de Geer from the Delft Public Library. Their presentation at Internet Librarian last year might be my favorite conference moment of 2007. This should be just as good! They’ll share stories from their 2007 tour of U.S. libraries.