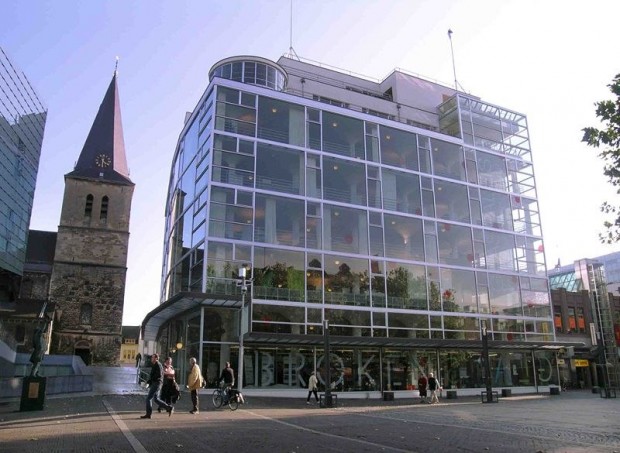 The Glaspaleis in Heerlen, The Netherlands, built in 1935. It is a former a fashion house, and now contains the town’s public library, a movie theatre and art gallery.

The library is spread over four floors and is the big attractor with 250,000 visitors per year, which also benefits the other occupants. Conversely, its collection has a focus on the topics of the other occupants, resulting in a dynamic situation of mutual cultural impulses. The film house, De Spiegel (‘the Mirror’), is a volunteer organisation, focusing on quality, as opposed to mainstream cinema, showing films by David Lynch, Peter Greenaway, Stanley Kubrick and Woody Allen, but also less known film directors. There are plans to use the glass walls as a projection screen, projecting films from the inside, which can be viewed from the squares surrounding the building. [wiki]