There’s more to design than appearances, but the way an object looks is often the most immediate and apparent aspect of how it has been designed.

The power of this immediacy allows some designers to think only about aesthetics, and that leads to attractive but unusable stuff. This happens quite often with websites created using Flash. LEGO Cl!ck is a very attractive site, but I can’t figure out what its purpose is, and I don’t feel confident using or navigating it. Still, visual design is so powerful that people continue to buy difficult-to-use things simply because they’re nice to look at.

Of course, a focus on meaning and ease of use doesn’t mean aesthetics should be ignored. People are less likely to use something if it isn’t pretty, but aesthetics are even more important when they impact an object’s utility, as in the case of graphic design.

Many small and medium-sized libraries—and some large ones, too—don’t have the luxury of an in-house graphic design department to create nice-looking, effective, and consistent signs and brochures. Let me be clear: a beautiful sign isn’t enough to save a library or make it relevant to its community, especially if it communicates a broken policy. It will, however, do something more subtle but important when it contributes to an overall pleasant experience for library users.

While pointing out ugly and rude messages in libraries has been a niche popular pastime recently, less has been done to help libraries improve their signs. Here are a few tips.

Conduct an audit List on a spreadsheet all of the signs in your library, especially the little bits of paper taped up in random places. Note their message, location, attitude, and aesthetic. I wrote a blog post a while back proposing a grading matrix that might come in handy in judging your signs

Do any of these signs communicate out-of-date or questionable policies? If so, raise the issue with the appropriate people. Remove any signs that aren’t necessary or helpful. Fewer signs in your library will make the remaining signs more effective. Using your spreadsheet, figure out which signs should be redesigned first.

Redesign the signs The first step in redesigning a sign is to remove as many words as possible while still retaining the sign’s message. Fewer words means fewer elements competing on the page. It also means that you’ll have room to enlarge some or all of the words on the page, making them easier to read. After that, it will probably be simpler to apply these two basic graphic design principles.

2. Left justify the words. This arrangement is much easier to read and comprehend than center justification, which is seemingly ever-present on library signs.

Check out the example on this page of an actual sign I saw recently in a library and a quick revision I made using the above principles. 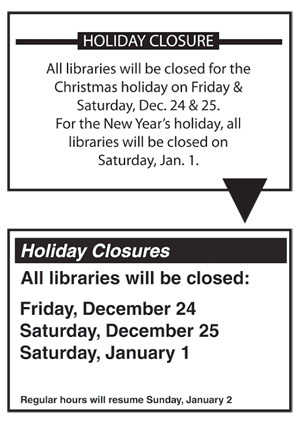 The original sign did some things well. It used an easy-to-read sans-serif font, Myriad Pro, which is the default font for many versions of Abode Illustrator. It also made use of contrast to give the page title more prominence. Importantly, it avoided using clip art in an attempt to liven up the design.

The revised sign removes unnecessary words, which let me use a larger font size and bolder font, in this case, Helvetica Bold. The sign title is the same size as the rest of the words but is offset by reversed black and white and by added italics. I left justified the words and evened out some of the vertical spacing. The extra space allowed me to add a message about regular hours resuming. I could have just as easily included some library branding there.

My revision isn’t perfect—it could be considered boring. I happen to think signs like this should be boring because they’re usually meant to communicate important info, not entertain people. That being said, someone with real graphic design chops could make even more improvements.

The tips above can improve your signs, but they’ll only take you so far. For more help read Robin Williams’s The Non-Designer’s Design Book and Tony Seddon’s Graphic Design for Nondesigners.

Beyond redesigning Tacking up an instructional or prescriptive sign should be a last resort. It should only be done when absolutely necessary and when whatever the sign is about can’t be changed. We should aim to make our buildings and services so intuitive that little taped-up signs are redundant. The signs that we do need to put up, along with other print material, should be as easy to read and beautiful as we can make them.

This article first appeared in my LJ column called The User Experience.