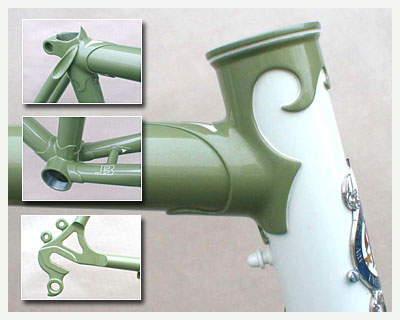 Don’t you love it when different spheres of your life collide? Today I saw an Interview with Grant Petersen of Rivendell Bicycle Works that contained a few good acorns for libraries. The interview and the pullouts might make sense with some more context.

RBW is a small company that makes high end bicycle frames that has a strong (read: cult) following. “High end”, you say? Their flagship bicycle frame, the custom made Rivendell, costs $2750 and takes two years to get to your house (…don’t worry, the production frames are only about $1400 and come much quicker). Their frames are beautiful, practical, and well made. Grant Petersen, the personality behind the company puts out a journal-esque catalog called the Rivendell Reader that is infused with his voice and character. Our library newsletters and websites should be more like it. For a sampling, there are some good bits in their online catalog. Here’s part of a description of the kickstands they sell:

When Barbara Torres ordered her Rivendell with a kickstand plate and couldn’t be talked out of it, I said fine, and that was that. Two others followed, and I’ve since put one on one of my bikes (see the cover of RR30), and my daughters insist on them and my wife wants one. I don’t think every bike should have a kickstand, just lots of them. They weigh as little as 9.5 ounces, are simple to use, keep your bike from falling over, and are cheap. Most of the bikes in the world have kickstands, because they’re shopping and commuting bikes. That’s not dorky, just smart.

Everyone should be authentic when writing on library websites/weblogs, but the writing should strive to highlight the humans of the institution. This sure does.

On to the interview. Most of the questions at the Push Button For interview are cycling and fly fishing related, but read this one in relation to our OPACs and services.

In your catalogs, web site, and in The Rivendell Reader, you write a lot about simplicity. Why is simplicity important? Simple things make people feel smart, or at least competent, and complication has the opposite effect. If people feel smart and competent, theyâ€™re happy, and happy people are nice to other people, and it all starts or stops with how hard it is to use something.

Regarding running a transparent organization, it seems to come so naturally that he doesn’t quite grok the question.

You run Rivendell as openly as any company Iâ€™ve ever seen. Is there a conscious philosophy behind that? Well, I wouldnâ€™t call it a philosophy, but I donâ€™t distinguish between â€œmeâ€ and â€œmy companyâ€ when it comes to things like keeping secrets and telling the truth. Itâ€™s hard to keep secrets, so itâ€™s best not to have any, but beyond that, Iâ€™m not exactly sure of what you mean by â€œopen.â€ Is that it? If it isnâ€™t, just clarify it and Iâ€™ll try to answer it.

One thought on “libraries can learn from rivendell bicycle works”