One indication that something is well made is that it becomes better with use. Think about your favorite pair of jeans or a leather briefcase handed down from a father to his son. These things might not necessarily appreciate in actual monetary value but they’re nicer to use than when they were brand new.

In this way, libraries should be like a nice leather briefcase. However we conceive of them a bit differently right now. 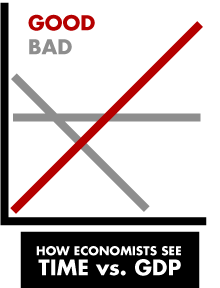 Things that get better with use have to last a long time. Most of the time, though, people buy inexpensive and low quality goods (quite often manufactured in Asia). Why? It’s often temporarily easier to buy things that are less expensive if your focus is on the short term. Especially if after some time passes you are going to want the Next Big Thing anyways. We’re conditioned to think like this. In the USA, 70% of our GDP consists of consumer spending and the success of our (global) economic system hinges upon continued and never ending increase in GDP. Hence, more spending and a lack of focus on stuff that lasts.

I realize I’m a bit of a pinko and live in People’s Republic of Portland but I don’t think it takes a tremendous amount of insight to realize that such growth isn’t sustainable in the long term. Currrent economic crisis, anyone? Global warming?

Economists & Librarians: Peas in a GDPod 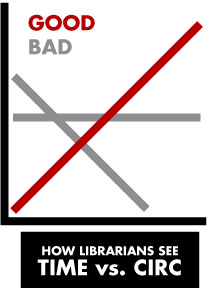 What do consumer spending habits have to do with libraries? Just like economists are obsessed with increases in GDP, librarians are obsessed with increases in per capita circulation. Both are rather shallow.   I bet these statistics play a major role in 99+% of reports to library boards. Similar reports go to the state libraries at the end of the year. I don’t know if anyone takes the HAPLR ratings seriously anymore (the animated .gif on the homepage certainly doesn’t help) but 6 out of 15 measurement categories are related to circulation. That’s 40% of the measures. LJ’s Index has less criteria, four, which makes circulation 25% of their measures.

And just like continual increases in GDP aren’t sustainable, libraries can only optimize their operations and collection development strategies so much. If we extrapolate this model a few centuries out we will see a library either circulate nothing, stagnate, or checking out 5000 items per day. I dare say the later scenario is physically impossible.

The continuation of increased circs isn’t something we can take for granted. This is compounded by the fact that libraries are being squeezed out of the content distribution game by the lack of circulatable digital commercial content.

We’re not at a crisis point yet. Many libraries have been able to get more and more items into the hands of patrons to stay solvent. The fact remains though, that there’s an upper limit to how much can be circulated. What’s the plan for when that happens?

I don’t think I’ve met a librarian who really values circ stats beyond being happy to report favorable ones. Everyone just seems to accept that shuffling content around and reporting the stats is the way the game is played. Including me, to some extent. Why shouldn’t a library be proud when it circs a bunch of stuff?

Even if it were possible, though, the continuation of the red trend isn’t desirable. Our collective fixation with circ numbers is stifling the evolution of libraries. It is making us focus on a very narrow and relatively boring aspect of libraries: distributing content.

Much like there are difficulties in (quantitatively and even qualitatively) measuring the characteristics of your favorite jeans that have become more comfortable after five years, libraries don’t yet have a mechanism for measuring success without circulation statistics. (Or similar stats like computer use and reference questions asked.) Measuring something as grand and vague as “helping people accomplish tasks that support their goals” poses challenges.

Let’s suppose that a library shifts the emphasis of its efforts and has wild success supporting community and individual goals. How could they measure it? Customer satisfaction surveys? Seems like a fine idea but nothing that could be relied on fully. Telling stories of the successes? Good. Having people in the community tell their stories? Better.

What about people showcasing how they’ve solved their problems and achieved their goals by using library resources and connections? 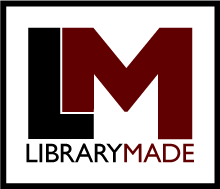 Imagine if alongside a Creative Commons icon you found a Library Made icon. Clicking on it leads to authorship info, the context in which and when the content was created, and what library resources (including people) were consulted in the process. Also listed are links to other relevant library projects and any other pertinent info.

Even better it works the other way too. Library resources link out to these projects, demonstrating that they’ve been used, how they’ve been used and who has used them. Think of it like trackbacks for library content.

A concept like Library Made is a measurable way that our libraries could become more rich with use.

If you’ve ever felt the awe of history contained in an old object handed down to you, imagine what it would be like to open a book and see what’s been done with it and how it has changed its readers and its community.

Growth of this type is more sustainable and certainly more meaningful than increases in cheap-like-Chinese-goods per capita circulation. Looking to the future we don’t see the absurd scenario of people checking out 5000 items per day. We see libraries enabling people to share knowledge and solve real problems.